Journey of the Self: Aatish Taseer's Stranger to History

"I had sought out my father because I couldn't live with the darkness of not knowing him."
Absent fathers make for haunting presence. Think of Hamlet, Ghosts, and The Glass Menagerie.
Aatish Taseer's first book: Stranger to History: A Son's Journey through Islamic Lands is a young man's search for his father who like the father in The Glass Menagerie is for many years just a photograph in a browning silver frame. 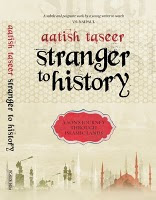 As young Aatish grows up, he starts realising that there is something that sets him apart from his Sikh cousins. Later a therapist in a boarding school impresses upon him the fact that he should try and contact his father, the Pakistani politician, Salmaan Taseer, and form an opinion of him himself rather than simply relying on the recollections of his mother, the Indian journalist, Tavleen Singh. The young boy gets hold of his father's number and gives him a call. From then on begins an on-off relationship with his father.
Things come to a head when Aatish publishes an article on the growing Islamic extremism amongst second-generation Pakistanis in . Since it is his first cover story, he sends a copy of it to his father and eagerly anticipates the latter’s reaction. His father’s letter shakes him up as he accuses Aatish of spreading invidious anti-Muslim propaganda. This leads Aatish to think of his own Muslim self, of his father who never followed the tenats of Islam but called himself a Muslim, of his great-grandmother, who never recovered from the horrors of partition, and whose first comment on seeing the infant Aatish was: “Yes, he is lovely, but Muslim nonetheless.”
It is in search of his own identity that Aatish sets out on a journey thru Islamic countries. The book chronicles the journey thereof. In Turkey, he sees people turning away from the almost militant secularism of Ataturk; in Syria, he watches the enflaming of passions over the cartoons of Prophet Mohammad; in Iran, he has an experience of a ‘police state’ but also realises the resentment of a few against the ‘arabinasation’ of Islam. He also finds cults like Hare Rama Hare Krishna! And finally to which was made for an idea, and which had broken with history for that idea.
Interspersed through all this is his own discussion with self and surroundings as also a glimpse into his personal history. There are some heart-felt passages, where he realises what he has missed out in his life:
Through the whole experience, I watched a small boy, sitting at my feet in a white skullcap. He fiddled, then fell occasionally into the prayer position, then got up and looked around. He had beautiful light-coloured eyes. Seeing him near his father, in the all-male environment, it was possible to see how visiting the mosque could become a special rite between father and son.
However, the one passage that resonated with me is the one where he describes his grandfather’s longing for an undivided :
His face came alive as he’d tell me the story of how he had called my father from to inform him of my birth. When the operator on the Pakistani side spoke, and my grandfather heard the music in his accent, he gasped, ‘He spoke my Punjabi!’
I can well relate to the sudden sense of belonging that arises when one hears the Raavi-paar Punjabi.
*
Stranger to History is easily available in bookshops and can also be purchased online. I bought one from a shop at South Ex, .
*
Entered for the Book Review Party hosted by Cym Lowell every Wednesday.

He walked slowly across the room until he was standing face to face with Brat by the window. He had abnormally clear grey eyes with a
darker rim to the iris, but they had no expression in them. Nor had his pale features any expression. He was so tightly strung, Brat thought,that if you plucked him with a finger he would twang.

And then quite suddenly the tightness went.

He stood for a moment searching Brat's face; and his own was suddenly slack with relief.

"They won't have told you?" he said, drawling a little, "but I was prepared to deny with my last breath that you were Patrick. Now that I've seen you I take all that back. Of course you are Patrick." He put out his hand. "Welcome home."

Brat Farrar, the eponymous hero of Josephine Tey’s 1949 novel, is a foundling brought up in an orphanage. A loner by disposition, Farrar leaves in his teens, traveling as far as and the but without settling anywhere. The only solidarity that he feels, in an otherwise lonely life, is with horses. Returning to , he is one day accosted by a man called Alec Loding. A bit-part player, Loding, wants Farrar to impersonate Patrick Ashby, a neighbour of his in a village called Clare. Patrick had committed suicide some eight years back though his body has never been found. Had Patrick lived, he would have turned twenty one in a few weeks time and inherited his parental estate. At first, repulsed by the offer, Farrar starts taking an interest in the scheme as it provides him with excitement and thrill. Secondly, there are horses on the estate, and finally because somewhere he is keen to have a family. However, his decision to go along with the impersonation has far reaching impact on the other Ashbys, most notably, on Simon who as the slightly younger twin of Patrick was about to inherit the estate.
The book is not much of a mystery because you know right from the beginning that Brat Farrar is an imposter. The other mystery – that of the death of Patrick - can be easily deciphered too. The only mystery, in fact, is whether or not Brat is an Ashby and if so, who sired him. The plot, thus, is not gripping but Tey’s talent of creating memorable characters - notably the Rector George Peck and Aunt Bee who have a quiet dignity about them - keeps one engrossed in the text. Also, Tey’s description of the English rural life is engaging, though the details are more like that of life in the Thirties rather than what its date suggests -
a post- world war second novel.

Brat Farrar can be purchased online or you can download it for free, as I did, from this site: http://gutenberg.net.au/ebooks08/0800471.txt

*
SPOILERS
The problem with Josephine Tey is that very early in the novel you get to know the characters the author sympathises with. From then on, the reader too is either forced to like those characters or if not then the reader is damned because the characters the author herself is not fond of come to a bad end. So it is with Simon in this book. Rather early in the book, I could guess what had happened to Patrick and for this Simon had to be shown as a petty, mean little thing. As Brat rises high in the esteem of everybody, Simon repeatedly comes across as shallow and finally downright evil. Questions like how could a thirteen year old execute such a diabolical plot or why the family was so eager to throw him over in favour of Brat are never satisfactorily answered. The way the family did behave was almost like they wanted somebody to spite Simon. Thank God Tey didn’t make Simon to have engineered the death of his parents too!