The Spider caught in its Own Web: Murder of a Martinet

It was after midnight when Macdonald heard the faintest of faint sounds on the floor above. Indeed it was hardly a sound at all,more a tiny vibration which told of movement, as though all the resting floorboards communicated a change in stress. As always, after a period of silent waiting, Macdonald felt that faint stirring reflected in his own blood beat, as though the communication of intimate things was passed on to flesh and blood. He was quite sure what that faint sound had meant - somebody had got out of bed, transferring his or her weight very cautiously to a different section of the floor. A second or so later he became aware that he himself was not the only person in the house who had noticed a movement on the floor above him. From a room across the landing on which he stood came a corresponding tremor and then a door must have been opened. It was opened silently... 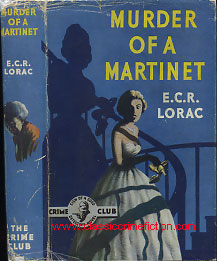 It is not everyday that you pick up a novel where you do not know the exact meaning of a word in the title. Martinet??? What's/ Who's that? But it was a Crime Club novel, it dealt with murder, and it was written by E.C.R. Lorac, an author I wanted to read since I read Bev's review of Rope's End - Rogue's End.

I wasn't disappointed. The gentle paced novel takes us inside an old family mansion ruled over by the formidable Muriel Farrington. Assorted around her are her second husband Colonol Eddie Farrington, and their three children Joyce, Peter, and Paula; her son by her first marriage Tony Strange, Tony's wife Anne; Joyce's husband Philip Duncan; and Madge Farrington, Eddie's daughter by his firsr wife. Whew. You wonder how Clive, her son, got away.


Well, anyway Muriel is a control freak who wants all the family members dependent on her and she knows all the tricks of having them under her thumb. Only one day she goes too far and ends up dead. Enter Chief Inspector Macdonald of the CID who quietly and efficiently unmasks the killer.


The book doesn't have the kind of chills and thrills that Death in Kashmir (the murder mystery I read prior to this) has, but in its own way, it's pretty engrossing. I quite loved it especially because I enjoy murder mysteries set in a decaying house with a handful of suspects and all the pressures and passions therein. Also liked Chief Inspector Macdonald with his sympathetic and subdued manner.


What I did not like were the bland statements made by the author at times. Here is a comment interspersed between an interaction between two characters: Madge hated Anne and was bitterly jealous of her.


It is always more interesting if a reader gauges such things by himself/herself, judging by the characters' actions, conversations, and unspoken gestures.


However, these are minor blemishes and easy to cast aside (though they can be jarring while reading the book).


Read it if you are fond of mysteries with a no-frills tone.


First Published: 1951
Alternate Title: I Could Murder Her


Oh yes, Martinet means either a strict disciplinarian or somebody who strictly adheres to the rules. After Jean Martinet, a French General who invented a system of drill.


The book might be available in libraries. I borrowed mine from one too: Hardayal Library at Fountain. [FLE 85A.B.]


*
Submitted for the following Challenges: 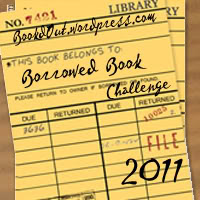 5 Best Books is a weekly meme hosted by Cassandra at IndieReaderhouston where one has to list five books on a particular topic. This week the topic is the rather oxymoronic 5 best books with horrible titles.


Here is my take:

The Great Gatsby: It's better than Trimalchio in West Egg but it is too prosaic for a beautiful novel. Fitzgerald could come up with such poetic titles as This Side of Paradise. What happened here? 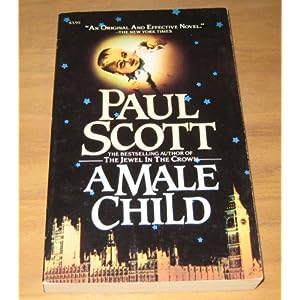 A Male Child and The Chinese Love Pavilion: Paul Scott's books are extremely moving. Yet, the titles are anything but... Yes, the first book is about a mother's obsession with her dead son but the title could have been better thought of. As for the latter, it conjures up in my mind the image of hot baths, slinky young things in red silk gowns giving massages to overweight oldies. It is just too sleazy.

The Go-Between: The title is no doubt appropriate about a story that involves a child being unwittingly used as a conduit. But a novel that begins with the immortal line: The past is a different country could have used a more imaginative title.

Lord Jim: Conrad could come up with a profound title as Heart of Darkness. Over here, he simply flounders.

Posted by neer at 1:31 AM No comments: Links to this post

The Time will Come

Thru The Slowest Bookworm, I've come to know of an interesting weekly meme hosted by Jodie @Books for Company. She writes:

It's really easy to join in.  Here's what you have to do:
Here's a book that has been on my shelves for ages:

Giant by Edna Ferber
I saw the movie, fell in love with James Dean and Rock Hudson. Squealed with joy when I found the book at the Sunday Book bazaar. And then...it just sits over there...

To join in the fun or to see the entries of others, click here:
http://www.booksforcompany.com/2011/08/time-will-come-28.html