L is for Love that dare not...

It is the fin-du-siecle and the whole of England is abuzz with news of a particular trial.In the dock is Oscar Wilde - till the other day, the Lion of London. The charge against him is that of 'gross indecency'. 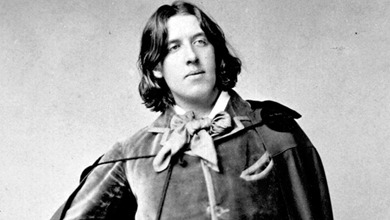 The Prosecutor Charles Gill, quoting from the poem Two Loves written by Wilde's lover Lord  Alfred Douglas, asks him: "What is that love that dare not speak its name?" Wilde replies: "The 'love that dare not speak its name' in this century is such a great affection of an elder for a younger man as there was between David and Jonathan, such as Plato made the very basis of his philosophy, and such as you find in the sonnets of Michelangelo and Shakespeare. It is that deep spiritual affection that is as pure as it is perfect. It dictates and pervades great works of art, like those of Shakespeare and Michelangelo, and those two letters of mine, such as they are. It is in this century misunderstood, so much misunderstood that it may be described as "the love that dare not speak its name," and on that account of it I am placed where I am now. It is beautiful, it is fine, it is the noblest form of affection. There is nothing unnatural about it. It is intellectual, and it repeatedly exists between an older and a younger man, when the older man has intellect, and the younger man has all the joy, hope and glamour of life before him. That it should be so, the world does not understand. The world mocks at it, and sometimes puts one in the pillory for it."

Lucid but lacking the dazzling wit that Wilde displayed when he declared so disarmingly to an American Custom Official that he had nothing to declare "but his genius."
*
Which is your favourite witticism of Wilde? Do share.
*
Entry for letter L.
Posted by neer at 5:31 AM