A is for And Then There Were None

Eight people - strangers to each other - are invited to an island off the Devon coast.


On arriving there, they are welcomed not by their hosts -who have unfortunately been delayed but would be joining them the next day - but by the serving couple. Strangely enough, all of them have only a hazy idea of who has invited them (or in a couple of cases, employed them). Uneasy in mind, they make their way to their rooms, only to find a curious poem pasted on the walls/ above the fireplace: However, just as they are relaxing over drinks and discovering mutual acquaintances, a disembodied voice accuses each one of them of having commit ed a murder. After the confusion and protestations of innocence, they decide to leave the island only to find that they are stranded on it. And then the deaths start occurring, eerily like the way described in the poem. As the body count grows, they come to the chilling conclusion that the murderer is somebody amongst them. Who amongst them is the murderer? Would the others be able to unmask the killer before nemesis overtakes them all? *
I don't know how many times I have read this book. Every time it seems as thrilling as when I read it for the first time.

After a lot of Should I? Shouldn't I?, I have finally decided to join the Crime Fiction Alphabet, a community meme, hosted by Kerrie @ Mysteries in Paradise. She writes:

The meme starts tomorrow. If you are interested, head over here:
http://paradise-mysteries.blogspot.com.au/2012/03/announcing-crime-fiction-alphabet-for.html

What do you do when you come across a blooper in a book?

There I was immersed in Rosie Thomas' The Kashmir Shawl when I came across this sentence:

"I shall order the tickets for Chandigarh."

Chandigarh! I did a double-take. Read the sentence again. Cleaned my glasses and read it yet again. There was no doubt, the tickets were for Chandigarh.

What is so great about it, you might ask? Chandigarh is one of the loveliest cities of India and many people visit it. Only this, the Welsh Missionary couple about to make their way to Chandigarh do so in the year 1941 and Chandigarh was built during the 1950s!!!  I don't know how people used to reach Leh (the ultimate destination of the couple) during the British Raj but it surely could not have been via Chandigarh.

As far as the story goes, it is not a major issue. Chandigarh is merely a stopover for the couple as they make their way to the upper reaches of the Himalayas but somehow I find myself unable to move beyond it. Had it not been something I was aware of, I would have just skimmed over it but since this is something I know, I find myself returning to it repeatedly. It has made me wary of the book.

Has it happened to you too? What do you think of factual inaccuracy in Period Novels/ Historical Fiction? Does it spoil the book for you? How does one move beyond it? Do share.
Posted by neer at 3:20 PM 11 comments: Links to this post

In April, I participated in the A-Z Challenge. The aim was to write one post each day pertaining to the letters of the English alphabet. April became a busy month especially for someone like me who posts once a week on an average.

But the surprise was the letter E. I had planned a post on Enid Blyton. But the accidental deletion of the post on letter D made me write an impromptu post. The results were surprising. It soon garnered so many hits that it has become the most popular post of my blog ever. And the difference between it and the second most popular one is hug........EEEEEEEEEEEEEEEEEE

I also discovered a few interesting blogs and got a few followers for my blog. Thanks a lot guys and hope you enjoy the posts.

Now I can proudly wear the survivor badge. 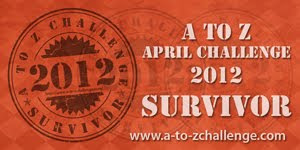 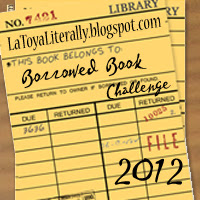 The first challenge I have completed this year is the Borrowed Book Challenge hosted by La Toya @ La Toya, Literally. I had committed myself to reading 5-10 books from the library in a span of three months (Feb- Apr). I read 6 books in all, though could review only five.

The books read are:

He Who Whispers by John Dickson Carr
The Beast Must Die by Nicholas Blake
The Crime at Black Dudley by Margery Allingham
The Slippery Staircase by ECR Lorac
The Story of Ivy by Marie Belloc Lowndes (submitted for the February Mini-Challenge which required one to read a book of romance)
The Eight of Swords by John Dickson Carr (could not review this one).

I had great fun participating in the challenge. And I hope it is hosted next year too.
Posted by neer at 7:45 PM 4 comments: Links to this post

This month's prompt at the A Classics Challenge is regarding covers. The questions asked are:


Level 1
What are your first impressions as you look at the cover?

Level 2
Does the book cover have an aspect that reflects the character, setting, or plot of the novel?

Level 3
If you could have designed the book cover what would you have chosen?

Well, the classic that I read this month was John Dickson Carr's 1946 Locked-Room mystery He Who Whispers.

The cover of the edition that I picked up was the staid Penguin cover giving no indication of the story whatsoever.

That was kind of disappointing because I do enjoy looking at the covers of the books though I don't think I've ever chosen a book just because of its cover.

A look at the other editions and I found that some of them had rather salacious covers: 
The cover that I liked best was this: This is the virtually inaccessible tower where the murder is committed.


Submitted for the April prompt of A Classics Challenge. 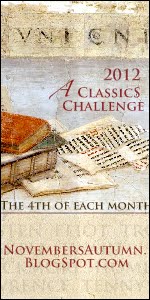