Forgotten Book: R is for Rex Stout's The Mother Hunt

That was for my benefit. he had a triple conviction: that a) his animus toward women made it impossible for him to judge any single specimen; that b) I needed only an hour with any woman alive to tag her; and that c) he could help out by asking some blunt impertinent question, his favorite one being how old are you. It's hopeless to try to set him right.

I had heard of Nero Wolfe but had no idea how big (ahem!)  he was till I started blogging. Unfortunately the libraries that I frequent do not seem to stock Rex Stout and it was only this year that I saw one lying amongst a pile of books in a second-hand book shop and pounced on it.

Recently widowed, Lucy Valdon, contacts Wolfe to trace the mother of a baby left in her vestibule. The baby boy had a note pinned to his blanket which said that the baby was the son of Lucy's dead husband, the writer, Richard Valdon. Lucy has no problem with adopting the baby but she wants to know whether the note is true and if so, who happens to be the mother of the baby.

After making Lucy understand that it is going to be an expensive affair, Wolfe has a list drawn of all the female acquaintances of her husband. However, all the hundred and forty-eight women on it turn out not to be the woman they are looking for. A break comes in the shape of the special kind of buttons that the baby had on his dress when he was left at Lucy's. Before the lead can turn to be more fruitful however, the first murder occurs... 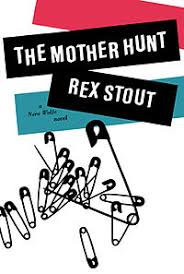 This was my first Wolfe and I enjoyed it. Loved Archie Goodwin's narrative style. Loved the supporting cast of Saul, Fred, and Orrie, the three detectives who do the leg-work for Wolfe; and Fritz, the cook, who has a  cyclical way of asking questions. The book was humorous though at times I wanted to shake Wolfe and ask him to act rather than sit back and read books. Now if only it did not have one of the most pathetic motives for murder that I have ever read.

First Line: When the doorbell rang a little after eleven that Tuesday morning in early June and I went to the hall and took a look through the one-way glass panel in the front door, I saw what, or whom, I expected to see: a face a little too narrow, gray eyes a little too big, and a figure a little too thin for the best curves.

Other Books read of the same author: None

The book can be purchased online. I bought it from the second-hand books market at Chandigarh.

Submitted for the following challenges: Mystery and Suspense, and New Authors

Entry for letter R in the Crime Fiction Alphabet meme

Entry for Friday's Forgotten Books
Posted by neer at 2:46 PM