I hadn't heard of Bill Pronzini till a few weeks back. But as he turned seventy, his birthday was celebrated in the blogosphere and a particular FFB featured a few of his books. [Very graciously, Pronzini  thanked everyone for the good-wishes]. As I read enthusiastic reviews of his work, I realised that here was one author I had to read. Unfortunately though the libraries I frequent don't seem to stock his books and the only one that I could lay my hands on was a book that he wrote jointly with Barry N. Malzberg: Night Screams. 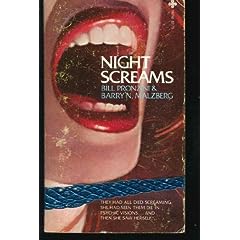 The beginning was not promising. A young woman has visions about a murder being committed. This was too much like Dean Koontz' The Vision, a book that I suffered last year. My enthusiasm for the book got slightly punctured.

Leslie Abbot is a painter who is also a clairvoyant and  has lately been having visions about people being murdered. She not only witnesses them being strangled but also feels their terror, and echoes of their screams reverberate in her mind. On top of it, she recognises the victims and feels that she knows their murderer too. A faceless figure whom she paints.

The murdered people are part of a group called PSYCHICs. (The Parapsychological Society: Yankees Clairavoyants in Humanistic Ideological Concord). The founding member of the group, Oscar Koskovich is a troubled man. He feels that two of the members: Tony Murray and Sandra Harris have died because of the fact that they were members of PSYCHICs and he feels guilty of having ever brought them together. He calls the remaining members of the group: Gloria Mason, Neal Iverson, Jo Turner, and Leslie Abbot for a meeting to discuss the situation. They check in at an inn in Whitehall where Leslie stays, much to her dismay as the people in that particular community do not like Psychics. She has already been receiving anonymous threatening calls. As they discuss the situation however, tensions amongst the group members - who have little in common - surface. Neal is of the opinion that somebody with a hatred of psychics is killing the members while Jo feels that somebody from their own group is behind the killings.

Meanwhile, the FBI enters in the form of two agents: Brad Saxon and Stan Walker. It seems that a bureaucratic agent by the name of Morris Evers has disappeared. Since Evers was the cousin of the murdered woman, Sandra, the FBI feels there is a connect between her murder and his disappearance. I reacted with dismay as Saxon made his way towards Whitehall - unconventionally handsome with a quiet determination not to mention a troubled past - it was predictable (yawn) that he would fall for our troubled heroine - attractive, sensible, vulnerable yet strong. More killings occur and though our hero pledges that he'd safe-guard the strong yet vulnerable Leslie, one does not have to be a psychic to know that at the last moment he'd be way-laid/ knocked-out and our vulnerable yet strong heroine will have to face the terror of the murdrer all alone.

Despite these cliches -I do not know whether these were cliches when the book was published (1979) - the book is an okay read with a balance between horror and humour. Neal with his psychic birds provides many  funny situations but there is also an understated humour as in this scene:

Colebrook came over beside him. "Mr. Walker ask you a question?"

"How long you planning to stay on here?"

"On when we decide to leave."

Colebrook pursed his lips. "Haven't seen your partner around since breakfast," he said. "He out on FBI business or something?"

"Be back pretty soon, will he?"

"Seems a man ought to be told what's going on inside his own hotel," Colebrook said stiffly. "Particular when there's government agents and murder involved."

"What do you know about murder, Mr. Colebrook?"

A vague look of alarm came into the innkeeper's eyes. "I don't know nothing about it."

"Then why don't we keep it that way?" Walker said and went away from him and up to the second floor.

Or in other words DO NOT MESS with the FBI. 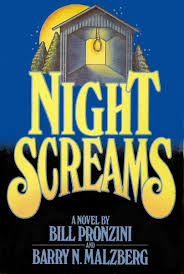 Over all, I wasn't too disappointed with the book but going by the reviews I don't think this is Pronzini's better ones either.


.At a point in the text, Abbot and Saxon listen to Louis Armstrong over dinner. Having only a vague idea of Armstrong and intrigued by a song called 'Muggles', I went over to You Tube and listened to it:

First Line: In the darkness, using the beam of his flashlight to guide him, he moved at a measured pace through the marshland.

Other Books read of the same author: None

Kindle edition of the book is being offered at Amazon. I borrowed mine from H.M. Library at Fountain. [F.P 89]