A couple of days ago, in mood for watching a b&w mystery movie, I decided upon watching the 1961 movie Taste of Fear, released in the US as Scream of Fear.

The movie begins with the chirping of birds. The placid lake surrounded by mountains and lush trees seems like an ideal spot. 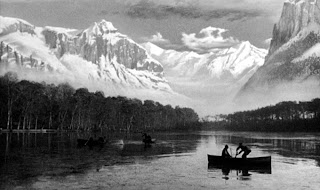 The serenity is shattered, however, when the body of a young woman is fished out of the lake.

The scene then shifts from Switzerland to France.  Penny Appleby, (Susan Strasberg) a physically-challenged young woman, is wheeled out of the airport and is greeted by her father's chauffeur Robert (Ronald Lewis) who informs her that her father had been suddenly called on business and thus is not there to welcome her home. Through the conversation between the two it transpires that Penny hasn't seen her father for the past decade, ever since her parents divorced and she went to Italy with her mother. Penny is curious about her step-mother, Jane, whom she hasn't met as yet. Bob informs her that, of late, her father hasn't been keeping too well. 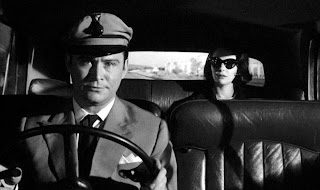 On reaching the house, Penny is welcomed warmly by Jane (Ann Todd) who seems like an unassuming woman. On Penny's apprehensions that she might not be able to even recognise her father, Jane gives her a framed photograph of an elderly man. On Penny's inquiry about her father's health, Jane becomes a little surprised and assures her that her father is in good health and Bob must have misunderstood the visits by the village doctor, Pierre Gerrard (Christopher Lee). Gerrard, Jane informs Penny, is a friend of her father's and merely comes home to play chess.

Penny, in turn, informs Jane that she is very glad to have received this invitation from her father as she was lonely after her nurse (who had been her companion and caretaker since her mother's death) died in a swimming accident three weeks ago. She is also touched by the efforts that Jane has made to make the house mobile- friendly for her.

That night, Penny  is awakened from her sleep by the banging of her room's doors. As she is about to close them, she sees light emanating from the room opposite. She makes her way over there and finds herself in the summer-house filled with curious artifacts. But the strangest thing is her father sitting on a chair, with a candle near his feet, staring at her. He is quite clearly dead. 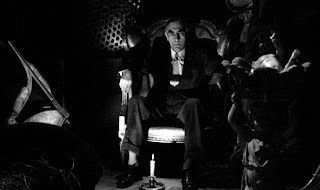 Penny screams the house down.


Actually wouldn't you if you saw these bulbous eyes staring at you in the dark of the night?

In her haste to get away from the room, Penny slips into the swimming pool from where she is rescued by Bob. When she revives, she insists on being taken back to the room and of course, there is nobody there. Not even the candle. The room has electricity connection. The doctor, who is surprisingly on the scene, gives her a sedative and tells her that it is a figment of her imagination as her mental state is supposed to be fragile. The next day, however, Bob does find wax-droppings on the floor of the room.

Before long, the young woman finds her father sitting in her room. Of course, by the time everybody reaches her, the man is no longer there. Convinced by now that her father is dead, that her step-mother is having an affair with Dr. Gerrard, and that there is a conspiracy afoot to declare her mad, Penny discusses her predicament with Bob who opines that the police will not hear them out without substantial proof. The biggest proof, of course, is the body. But where is it hidden? Could it be in the deep-freezer for which Jane has just got a new lock. That night, Penny and Bob, decide to break the lock... 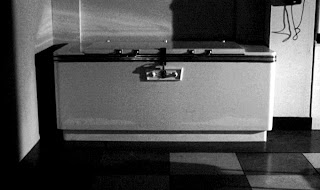 So do they find the body? Is Penny's father really dead? Is Jane really the sinister step-mother? What role does Dr. Gerrard play in all this? Is Bob really the knight in the shining armour? Does Penny really need a knight to rescue her?  Well, watch the movie to find out. :)

With enough twists and turns, this movie kept me glued to the seat. I got some of the things correct but not all. Susan Strasberg with her shades and pearls and very feminine dresses reminded me of a young Jackie Kennedy and played her role of a plucky young woman with aplomb. 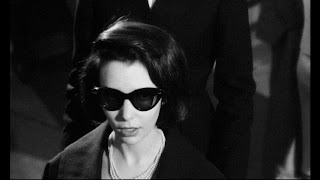 But it was the older couple Ann Toad and Christopher Lee who were the real stars to me. After watching the movie, I could only marvel at Ann's gestures that actually did offer a clue. And Lee, of course, is great as the deep-voiced doctor who seems to be there all the time, questioning Penny about her physical and mental state.

I was able to watch the movie on YouTube. The audio quality is not too good but the taut storyline is enough to keep you mesmerized. Strongly recommended.

Entry for Tuesday's Overlooked Films and/or Other A/V at Todd Mason's blog Sweet Freedom. Please head over there to view the other entries.

All the images are from Google Image. If these are copyrighted and cannot be used in this manner, please let me know and I'll remove them.