Forgotten Book: Cat of Many Tails by Ellery Queen

One day, there was a curious news item. A large family sleeping on the roof of their home was suddenly awakened, hearing the screams of one. Apparently that person had been rudely awakened from her sleep when she felt something sharp digging into her arm. She had cried out in pain and terror. There was no stranger on the roof, the door leading to the roof was still bolted from the inside, and the woman's arm was scratched and bloody. She couldn't be sure but thought she saw a shape beside her which had then disappeared in the gloom.

A family member up to some prank? Perhaps. But then news started pouring in from other localities. Darkness, Shadowy Figure, Bite Marks, Glaring Eyes... And soon Delhi was being terrorized by what the Newspapers termed the Monkey Man. This fellow was supposed to be four feet tall, was extremely agile, could leap and bound off and disappear in a matter of seconds, he had gleaming eyes, extremely sharp teeth, and he attacked randomly but in the dark. Soon streets bore a deserted look, children were forbidden to go to parks, and by evening people would sit indoors. There was one thing though that could scare away the Monkey Man and that was water. Localities, especially that were unauthorised, were soon receiving twenty-hour supply of electricity and water. Psychologists had a field time discussing neuroses and psychoses. Havans and pujas were performed so that this buri bala  would disappear.

And it did. Life got back to normal. And, in fact, I had quite forgotten about it till the day I started Ellery Queen's Cat of Many Tails. And then I suddenly remembered the Monkey Man. 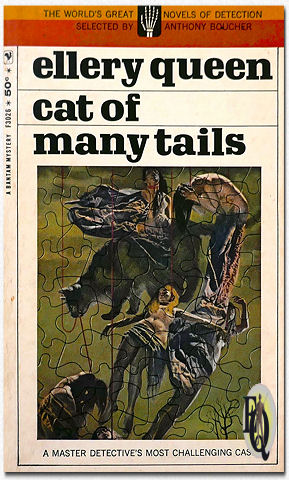 For Queen's novel also deals with paranoia that grips a city. New York is in a state of panic. There is a prowler in the dark, killing people randomly: Male and female, poor and rich, old and young, married and unmarried. The bodies are piling up, all dead of strangulation with cords made of Tussah silk and yet there is no connecting link between the victims. They seem to have been just picked randomly. If there is no method in the madness than how would the killer (dubbed the Cat by the tabloids) would ever be caught? Ellery Queen, feeling guilty over his failure in the previous case, is not inclined to even discuss the case but later on is persuaded and becomes the Mayor's Special Investigator. He does find a connecting link  and the thread leads to the Cat. But the Cat is a devious creature... I discovered Ellery Queen only after I started blogging. Wasn't too happy with the first one that I read of him: The Murderer is a Fox, but this book which details how fear strangles a city and the things men do in panic is quite gripping. I had guessed the identity of the Cat early on but still it was most interesting how things played out. I liked the relationship between Queen and his father, Queen senior, and was interested in the relationship between the married couples in the novel but the romance between two characters who help Queen in his investigation was quite irritating. The cities of New York and Vienna were also described as characters

"You find Vienna not as you expected?"...

Ellery started; he had been trying to ignore the shattered city. "It's been so many years since I was here last, Herr Professor. Since long before the War..."

"And the Peace," said the old man with a smile. "We must not overlook the Peace, Mr. Queen. Those difficult Russians, nyet? Not to mention those difficult English,those difficult French, and - bitte schon - those difficult Americans. Still, with our traditional Schlamperei, we manage to drag along. After the first war there was a song popular in Vienna which went, 'Es war einmal ein walzer; es war einmal ein wien.' And we survived. Now we are singing it again, when we do not sing 'Stille Nacht, heilige Nacht.' Everywhere in Vienna people are speaking of die guten, alten zeiten. How do you say this? 'The good old days'. We Viennese swim in nostalgia, which has a high saline content..."

[This description of Vienna reminded me of Greene's Third Man, which incidentally is the forgotten book featured this Friday @ Tipping My Fedora].

Now I am keen to read more of Ellery Queen. Which one would you recommend?

First Line: THE STRANgling of Archibald Dudley Abernethy was the first scene in a nine-act tragedy whose locale was the City of New York.

Other books read of the same author: The Murderer is a Fox