Forgotten Book: The Third Bullet and Other Stories by J.D. Carr

Since my new-found admiration for John Dickson Carr, I have been trying to read as many of his books as possible. Unfortunately, the library that I frequent has only a few of his books. Recently, I borrowed Carr's short story collection The Third Bullet and Other Stories. 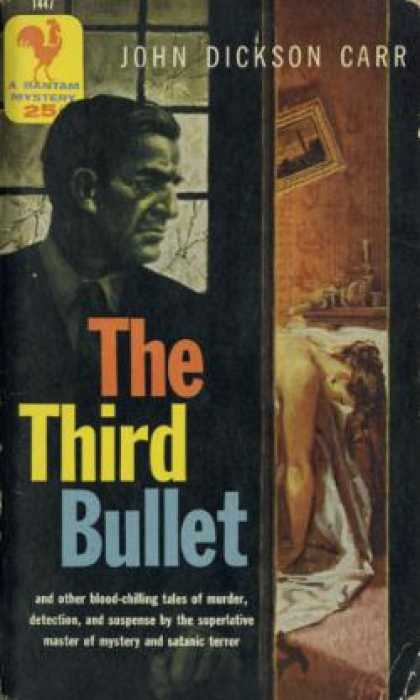 The title story is actually a novella. Justice Mortlake is murdered in the pavillion of his house by a man whom he had handed what many felt was a harsh sentence. The man is immediately nabbed by policemen who happen to be on the spot. But then it is revealed that the bullet which killed the judge did not come from the gun that the (apparent) murderer was brandishing. More confusion follows when a revolver is picked up from the room. One of the chambers is empty. Perhaps that is the murder weapon. No. it is not! The bullet that killed the judge was from another gun altogether. But in a locked room, in the sight of policemen where did the weapon disappear and more importantly whose is the hand that pressed the trigger as there was nobody else in the room except the two? I did not find the resolution too convincing and I have a sneaky suspicion that it was basically written for the last lines uttered by Colonel Marquis. Thankfully, the other stories are better. Dr. Fell solves three cases: The Proverbial Murder; The Locked Room; and the eerie The Wrong Problem where a man narrates the deaths (by almost supernatural agency) of his step-father and step-sister.

Carr's other detective Sir Henry Merrivale solves one of the most interesting cases: The House in Goblin Wood. The lovers Eve Drayton and Dr. William Sage invite Sir Merrivale to a picnic. Accompanying them is Eve's cousin Vicky Adams. Some twenty years back, Vicky Adams had disappeared from her house. The police had been informed of it and a nation-wide hunt had ensued for the kidnappers but the hitch was that all the windows and doors of her house were locked from the inside! A few days later, Vicky was found in her bed by her astounded father. From then on, Vicky claims to have the power of disappearing and entering another realm. Eve feels that her cousin is nothing but a sham and invites Merrivale to solve the mystery. They arrive at the house and sure enough Vicky does her disappearing trick. The doors and windows of the house are bolted, yet a young woman disappears almost in front of three people and only her voice is heard in a darkened room. Does she really have such powers or is there something far more sinister? This is the first time I read Henry Merrivale and found it an utterly absorbing story with a chilling climax.

The Clue of the Red Wig has one of the most memorable characters in the reporter Jacqueline Dubois. The mystery is good but it is Dubois who is unforgettable.

But the one that I liked the most was the last story: The Gentleman from Paris. Armand Lafayette (nephew of American hero Marquis de Lafayette) travels from Paris to New York in search of an old lady who charmed by a young woman (called Jezebel by Lafayette) has disowned her own daughter and willed everything to her instead. The daughter is dying of consumption and needs medical aid which however she is too poor to afford. Armand wants to convince the old woman to give some of her money to her daughter. He arrives and finds that the old lady is dying and in fact has made a new will but surprisingly the will has disappeared from her room. Nobody entered the room and the old woman has had a stroke which has paralyzed her and she is thus unable to speak anything. Armand is at his wit's end but he is helped by a particular gentleman in solving the case. And it is this gentleman who really is the surprise of the story. J. D. Carr has a huge and enthusiastic following among bloggers. Recently Sergio @ Tipping My Fedora conducted a poll on Carr's Top Ten Books. You can read more about it here and here.

First Line: On the edge of the Assistant Commisioner’s desk, a folded newspaper lay so as to expose a part of a headline: Mr Justice Mortlake Murdered...