After writing down reviews of five golden-age mysteries, here are reviews of more mysteries: 3 Fictional, one Non-Fictional. 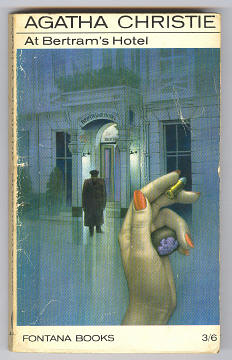 In  this year, I read a review of Eric Ambler's Epitaph for a Spy @ Bitter Tea and Mystery. After reading the fine review, I wanted to read a book set in a hotel. The only book that I could get however was this one that I had read before. In many ways, I found this book to be melancholic in tone. Miss Marple staying in Bertram's hotel, a place of which she has fond memories, reminiscences about the days gone by. She also becomes interested in the activities of the other guests and finally it is her acumen as well as her habit of eaves-dropping that helps the police solve the mystery of a number of robberies and a murder.

Is there anybody who hasn't heard about the Bermuda Triangle? I remember watching the movie as a school-kid and wanting to read more about it. But those were pre-google days and I could not get much information. By the time I got this book in 1998, my interest had abated. But this year I was determined to read it. The author Charles Berlitz writes an engaging account of the disappearances and the possible theories expounded regarding the mystery. But it was the Philadelphia experiment in which people disappeared and reappeared that literally gave me the shivers.

The Blue Hammer is the last book in the Lew Archer series written by Ross Macdonald. Archer is hired by the Biemeyers - Jack and Ruth - to investigate the disappearance (theft?) of a painting by artist Richard Chantry. As Archer investigates the case, he becomes interested in the life of Chantry who was supposed to be a genius and was posed for big things before his own disappearance. As the mystery deepens, Archer dwells into the past to reveal its continuing influence on the events in the present. The search becomes not so much for a lost painting as for lost father-figures.

Are there books that you find so disgusting that you want to wipe them off your memory? This is one such. Had I not been reading it on my computer but instead had a physical copy, I would have thrown it in the trash-can, something that I never-never do to book. A private investigator becomes obsessed with a woman he is supposed to investigate. The woman is a femme-fatale who goes on killing lovers and husbands (One of whom she gets eaten alive by a shark while another is bitten by a rattle-snake) and running away with their money. She goes on a killing rampage once because her protege has been killed in a robbery attempt (The girl had been shot by the employee of a shop who himself lost his life in safeguarding the shop that he worked at - an act described as foolish by the author. After all he wasn't the owner! Apparently, the author dwells in a different moral universe than me)

Yet it is the author's attempts (insidious to me) to create sympathy for the murderess that really made me mad: She is growing old and losing her beauty (sob!sob!); she has to wear glasses (sob!sob!); and dear me she has to work as a waitress [after running through her fortune(s)]. Please....

First Line: In the heart of the West End, there are many quiet pockets, unknown to almost all but taxi drivers who traverse them with expert knowledge and arrive triumphantly thereby at Park Lane, Berkeley Square or South Audley Street.

Title: At Bertram's Hotel
Author: Agatha Christie
Publication Details: London: Fontana, 1965
First Published: 1965
Pages: 192
Source: H.M. Library[F.C.A 49 AP]
Other books read of the same author: (Among Others) And Then There Were None

First Line: THERE IS A SECTION OF THE WESTERN ATLANTIC, off the southeast coast of the United States, forming what has been termed a triangle, extending from Bermuda in the north to southern Florida, and then east to a point through the Bahamas past Puerto Rico to about 40 degree west longitude and then back again to Bermuda.

First Line: I drove up to the house on a private road that widened at the summit into a parking Apron.

*
First Line: The Eye's desk was in a corner by the window
Title: Eye of the Beholder
Author: Marc Behm
Publication Details: NY: Ballantine Books, 1999
First Published: 1981
Pages: 183
Source: Open Library
Other books read of the author: (Thankfully) None