Reaction to Reading: Militant Nationalism in the Punjab (1919-1935) by Kamlesh Mohan


In 1928, the Colonial British government in India set up an all-White commission, headed by Sir John Simon. The task of the commission was to prepare the future constitution of India and yet not even a single Indian was part of this body. This insult was unacceptable to the Indians and all the major parties of the time decided to boycott the commission. The Indian public too joined hands with their leaders and massive demonstrations were held across the length and breadth of the subcontinent to protest against this high-handedness of the British. On 30th October, when the commission reached Lahore, it was greeted with black flags and lusty cries of "Simon Go Back". 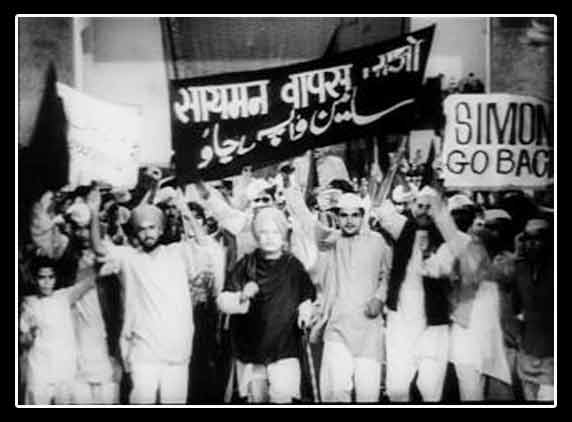 The police acted with brutality and the non-violent, peaceful crowd was lathi-charged near a barricade at the Lahore railway station. Lala Lajpat Rai, a venerated leader, became the special target of the ire of the Police force. And, in fact, had his supporters not shielded him, the aged Rai would have been even more grievously hurt. Such treatment meted out to one of the most respected of all Indian leaders shocked the people. Subsequent British attitude did not help matters: The enquiry committee reports exonerated the Police officials; the Indians' appeal for an independent enquiry was not accepted; and the sarcastic remarks of British officials (including the then Viceroy, Lord Irwin) added fuel to fire. Lalaji's death a few days later on 17th November was attributed to the mental humiliation and physical injuries he had received.

Any one with even a little interest in Indian history is familiar with this tale. One knows what happened to Lalaji and how subsequently his death was avenged by the Indian revolutionaries. I too am very familiar with these events. Yet reading the account in Professor Kamlesh Mohan's meticulously researched Militant Nationalism in the Punjab was another experience altogether. I strongly felt the pain and humiliation of belonging to a slave nation. You go on crying for justice and your colonial masters spit in your face...the extent of how insulted and stripped I felt surprised me and I wondered that if almost 90 years after the event, I could feel so victimised, how it must have been for those who lived through those times. What did they not endure? What kind of discrimination did they not face? In fact, after reading that account I had to stop reading for a while, walk aimlessly across the room to collect myself and then and only then could I go on.

For all those interested in Indian history and especially in the revolutionary stream of our freedom struggle, I whole-heartily recommend this book. With an easy narrative style, an abundance of notes, and a lengthy bibliography this is a book worth treasuring.

First Line: Growth of the national movement in India was a complex and multi-dimensional phenomenon.

Short Notes: The Thing on the Doorstep and Other Weird Stories by H.P. Lovecraft

Though I am sure that I must have read (at least one of) his works, sometime or the other, the first time, H.P. Lovecraft's name really registered with me was when I saw a review of a book  called The Call of Cthulhu @ Manybooks. The reviewer was all praise for the book and made me all eager to read it. Then came a rewatching of the Star Trek episode Cat's Paw where Robert Bloch (who had written the story/ screenplay) mentions The Old Ones which was (as reviewers on the Net informed me) a referencing back to the Old Ones of Lovecraft's imagination. The long and short of it was that I was keen to read Lovecraft and when I saw this book on the library shelf, I simply had to pick it up.

And I did encounter the Old Ones in The Mountains of Madness in which an expedition to Antarctica encounters an earlier alien civilization. But I also met many others like Charles Dexter Ward whose experiments lead him to things that should best remain buried; Pickman whose paintings have a strange model; Iranon who keeps on searching for a lost city, Henry Houdini who discovers the fabled fourth dimension under the Egyptian pyramids; Eric Zann who plays such music that brings forth something not of this world; and then, of course, there is that thing on the doorstep....

Edited by S.T. Joshi, this collection contains a brief introduction to all the twelve stories, suggestions for further readings (and going by it, Lovecraft seems to be quite a favourite of the Academia), and notes....copious amounts of notes. I wish these notes had been footnotes rather than endnotes because it became quite an exercise to keep on turning the pages to where the notes were at the end of the book. And sometimes the notes were completely  and utterly superfluous. At a tense moment in
The Dunwich Horror, while a character watches the proceedings from a telescope, there was that not-to-be-ignored note. Cursing, I left the narrative to go to the note only to be told that Lovecraft owned a telescope himself. GREAT! But how does it matter???????????????!!!!!!!!!!!!!!!!!!!!

Recommended strongly but for some days you might not want to be all alone in your house.

First Line: IN RELATING THE CIRCUMSTANCES which have led to my confinement within this refuge for the demented, I am aware that my present position will create a natural doubt of the authenticity of my narrative.