Lest We Forget: The Things They Carried by Tim O'Brien

Though it is one of the defining moments of the twentieth century, I have little idea about the war in Vietnam. What I know are the broadest of details: Vietnam (then called IndoChina) was a French colony. Sometime in the mid-twentieth century, the Vietnamese people under the leadership of Ho Chi Minh rose against their colonial masters. As is wont, the imperial masters never leave without a bitter parting kick and thus Vietnam was divided into North and South Vietnam with an agreement that the partition would terminate soon. However, the elections were never held and instead the North and South went to war. The US entered the war, helping the government of the South against that of the North, which it suspected of being helped by the Communist regimes of the world. The ensuing conflict was brutal and bloody. It is a depressing summary and too reminiscent of the way history has played itself out in many post-colonial countries.

I know there are many facets to the war. And if I want, I can just press a button and google will take me to many informative sites detailing the nuances of the war but I resist doing that, more interested in reading how the war plays itself out in the imaginative consciousness of the people. Whether it be as beautiful as Graham Greene's The Quiet American or as banal as the Star Trek episode A Private Little War.

Tim O'Brien's The Things They Carried belongs to the first category. Beautiful, evocative, poetic, gut-wrenching, part memoir, part fiction, part fact, part imagination, it is difficult to pigeonhole the book in one genre. 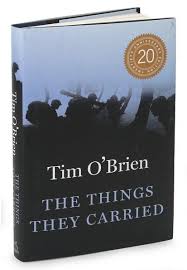 The narrator, now a middle-aged veteran of the war, looks back at his younger confused self who did not want to be part of the war. He was young and the world was promising. But then came the draft notice and though he tried to run away from it - both literally and figuratively - in the end he found himself enlisting in the army because he could not go against the public opinion which saw it as its patriotic duty to stop the communists. Part of the Alpha Company where the average age was nineteen, he grew close to his comrades-in-arms Jimmy Cross, Norman Bowker, Rat Kiley, Mitchell Sanders, Kiowa, Azar, Henry Sanders. The book belongs as much to him as to them: those who died, those who lived, and those who only partly-lived... 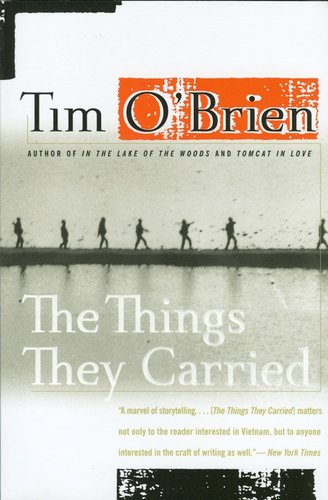 At one point, the narrator states that a true war story is one that is gut-wrenching and gives an example of one in which a soldier takes out his anger at the killing of a friend at a baby buffalo. The painful death meted out to the baby (not calf, mind you) is truly gut wrenching and you do not know whom to blame for this terrible state of affairs.

But my favourite was 'Speaking of Courage' about Norman Bowker who returns from the battle-fields but cannot forgive himself for not being able to save a friend. Round and round, the town he goes but cannot connect with anything. It is as though he was the one who died in that stinking mud. 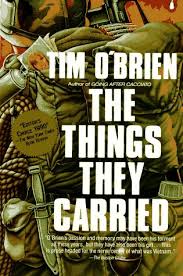 In the end, here are some beautiful passages from the book:

He was a witness, like God, or like the gods, who look on in absolute silence a we live our lives, as we make our choices or fail to make them. 57

What happened to her, Rat said, was what happened to all of them. You come over clean and you get dirty and then afterward it's never the same. A question of degree. Some make it intact, some don't make it at all. 109

That high elegant voice. Someday, when the war was over, I'd go to London and ask Mary Hopkin to marry me. That's another hing Nam does to you. It turns you sentimental; it makes you want to hook up with girls like Mary Hopkin. You learn, finally. that you'll die, and so you  try to hang on to your life, that gentle, naive kid you used to be, but then after a while the sentiment takes over, because you know for a fact that you can't ever bring any of it back again. You just can't. Those were the days, she sang.

Go, get yourself a copy now.Very highly recommended.