Despite my love for mysteries, I haven't read much of our Indian detectives. But this month, I was determined to read the exploits of Byomkesh Bakshi, a detective created by Bengali writer Sharadindu Bandyopadhyay, in 1932 and to whom I was first introduced to by an eponymous TV serial that was telecast in 1993. 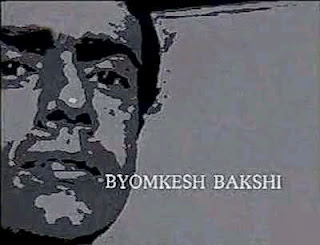 Though, I call him a detective, Byomkesh himself prefers the term Satyanveshi (Seeker of Truth) and in fact, Satyanveshi, is the title of his first adventure when not only did he get introduced to the reading public but also to Ajit Bandyopadhyay, who became his friend and chronicler of adventures.

The volume that I read contains the first fourteen stories of Byomkesh's career, from Satyanveshi to Aadim Dushman. The last story though published in 1955, is set in 1947, with India not only gaining independence but also being partitioned. Set in Calcutta, the last story describes  the horror of those days with riots breaking out, killings becoming common, and the communalisation of the law-enforcing agencies.


The other stories describing a haunted fort, a ghostly seance, a disappearing diamond, a poisonous spider, a deadly gramophone pin are all pretty gripping and I am keen to read the second volume of his adventures.

Those who cannot read Bangla or Hindi, needn't worry, Byomkesh Bakshi has been translated into English too.